Today I was talking with my family in the States, as we do every Sunday, when I told my mom I don’t really want to buy a separate Sim Card for my phone if I can’t have Wi-Fi as well. Since my mom is a brilliant human being, she reminded me that we’d packed a nifty little gadget that utilizes a Sim Card to create Wi-Fi! After this realization and a conversation with my host father who then pointed to my host brother (recently returned from college), I learned two things: tomorrow I can buy a Sim Card (yay Internet!) and my host brother speaks English…? Besides this exciting news, a lot happened this week.

On Thursday, I received my first package from the United States. My parents had informed me during our last call that it had arrived at Peace Corps Headquarters. It took 8 days to reach Mongolia (4 of those days were spent in Chicago) and then a week before Peace Corps officials brought it to my site. This was just a test trial, so only a few things, like sports bras, were sent from home, but it was still exciting. I’ll be receiving a new package filled with important goods and snacks from my mom!

Two nights ago, my host parents surprised me with a meal prepared just for my liking. When I learned how to say what I like and dislike in language classes, I decided to practice on my host parents; I mentioned that I love pork, just as a random fact to practice Mongolian. Then, this Thursday when we were eating tsuivan, I said that I like potatoes (in Mongolian meals that don’t utilize the plethora of spices Hungarian food does, the potatoes have the most flavor as they soak up the few flavors within the food itself). After going to the market, where I indulged myself and bought two nectarines and one orange, my host father proudly pointed out that they’d bought pork. I didn’t think much of it until he said “thank you………” in English in a sassy demeanor. At that point I realized the pork was bought for me, so that night for dinner, I had an extremely delicious meal consisting entirely of pork and potatoes. My host family is definitely the best!

They also took me on a couple trips this week. We went up to the Russian border on Monday. I had heard from previous PCVs that sometimes your host family kidnaps you on day trips during PST, and you have no idea what’s happening. Well, this turned out to be one of those times. I thought we’d go to the market like we usually do, but my host father kept going past the market and continued onto the highway. Luckily, the music selection was dope. Besides listening to an assortment of Russian, Mongolian, random Spanish, and Backstreet Boys songs, we also listened to Ace of Base, which ironically is a band my dad and I enjoy in the States (I guess this band transcends cultures with fathers). As we were driving, my host father pointed to the sign on the side of the road that said Russia. Apparently, we were going towards Russia. We ended up at the last soum (small town) right before the border. When we arrived, I called the PST Duty Office to inform them I had left my training site. We ate dinner at a khuushuur restaurant that was somehow owned by a member of my host father’s extended family (I didn’t really understand their explanation) and walked around. That’s about the closest I’ve been to Russia! 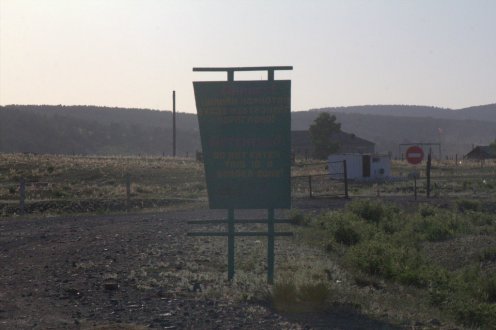 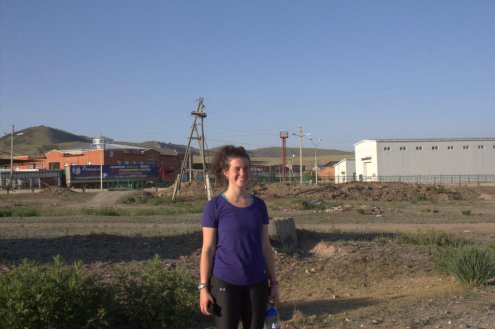 I also tried some new food at the restaurant. I’m not sure what it was, but it’s made up of some sort of cow’s milk product that gets mixed with a type of nutty flour used to make dough. The result is a slightly sweet paste.

I don’t know if you’ve noticed, but recently I’ve had more pictures of the places I visited. Previously, my host family wouldn’t inform me of when I’d need a phone/camera to take pictures, but after a double rainbow last week for which I brought out my nice camera, my host father now excitedly tells me to bring my “tom chck-chck (his sound for a camera shutter clicking i.e. big camera)”. Our trip to the Russian border was one of these occasions. Another occasion was when we went fishing. Now, I say we went fishing, but my host mother and I just watched my host father fish. I learned some new vocab about the river and train since we crossed the train tracks to get to the river. I also got to see the dilapidated wood factory. As we learned in our cross-cultural class that we have once a week, my training site was originally founded as the settlement for people working at the wood factory. This factory used to be the largest wood processing plant in Mongolia! Nowadays, most of the buildings are abandoned, but some are still in good shape and are used for day jobs like chopstick making. Apparently, this is where my host father occasionally works (although he’s retired). Still not sure what he does…

On our way back from fishing at the river, a couple extra people piled into the backseat. Turned out they were our neighbors. I was excited to get home since the mosquitoes were coming out at the river and because I had planned to go hiking with another Trainee. Little did I know that although we were right next to our home, we were not finished with our trip. As we drove by our house, I called my friend to inform him I would apparently not be able to go on the hike. We ended up driving to greenhouses out in the valley, where my host father helped set up the irrigation system and my host mother chatted with other Mongolians. 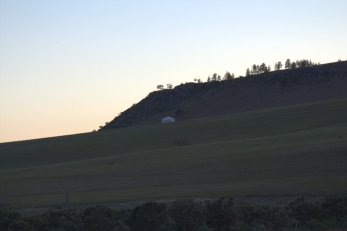 Luckily, the rest of the week I got to go on some beautiful hikes on the surrounding mountains. This week I haven’t really been running as much, partly because my knees mildly hurt (I think from using the outhouse or from running) and because there was slight drama with the neighborhood children. This week in class, we learned how to talk about our families, our age, and our phone numbers. The day I learned how to say my phone number, two of the neighborhood children happened to ask for it. Excited as I was about my newfound ease with phone numbers in Mongolian, I happily rattled off my number. Now we had been told during orientation by Peace Corps officials to be careful about to whom we give our numbers. I thought this meant random people and acquaintances; little did I know that this also extended to basically anyone in our direct community. That night, I came home and told my host parents I knew how to say my phone number. Right off the bat, they warned me not to give it to anyone but them. This brought up a slight communication conundrum as I had to inform them I’d already given it out. They proceeded to tell me not to answer any of the calls I would receive. Now, I had also been warned by PCVs that Mongolians tend to call multiple times a day even if the calls go unanswered. I was unprepared for the onslaught of so many calls. Every three hours, one of the three numbers would call my phone (apparently, my phone number had been passed around). This wasn’t annoying as some PCVs had made it sound, but I didn’t want to get into a sticky situation on a run where the kids would ask why I don’t respond to their calls. In reality, it was also nice to spend time with other Americans on these hikes after straight integration for the last week and a half into the community. Don’t worry though, I’m back to having my curls boinged by little girls and playing various children’s games (many of them were also played in the US during my childhood so I’m prettttyyyy good at them if I do say so myself). The calls stopped after a day and a half, which was a relief, so now my phone is reserved for calling other Trainees (yay for other Americans)!

I’m excited to go take a tumpun bath, and I’m hoping my host father finishes fixing the outdoor shower soon! Can’t wait to see what this week brings with the introduction of Wi-Fi to my life!